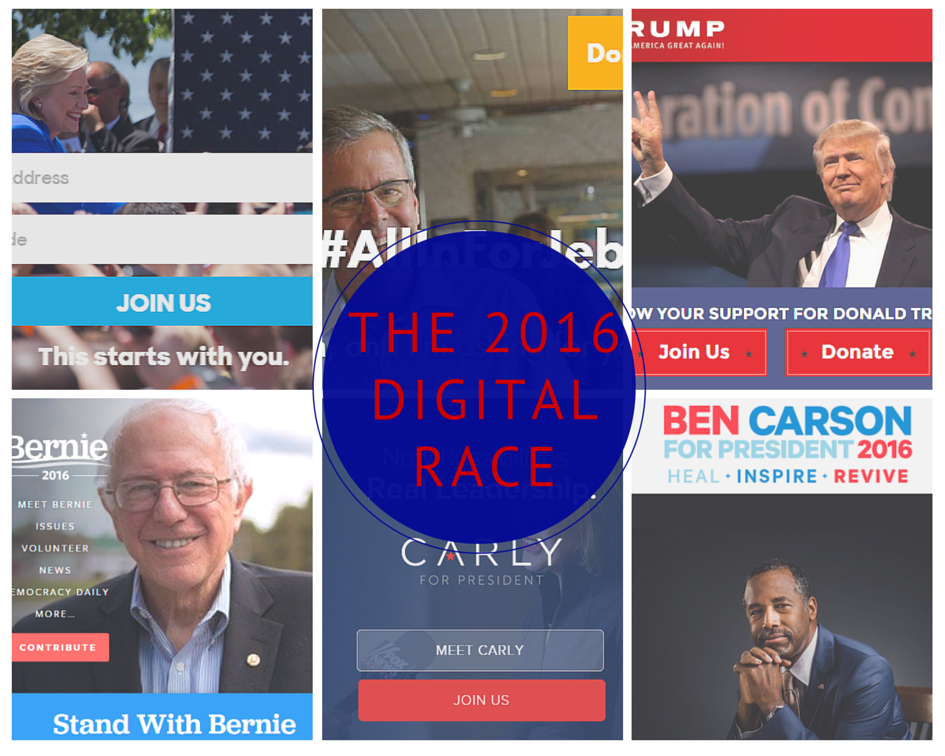 In the run up to every major election there's a tsunami of talking heads fighting over each other to mansplain the pointless political stances of the hopefuls. We already know what really matters is the digital strategies and the spaces they're built on.

It's a case of the chicken and the egg when it comes to the politicization of the digital space. What is clear is that since Obama's online campaigns the race for the White House is a digital one. Santorum learnt the hard way (which we covered here) that when it comes to digital campaigning a Google bomb can truly devastate a candidate's SEO standing.

If you are looking for a designer's take on the 2016 hopefuls, Medium already have a great and stinging takedown of the candidates' logos. It's thoroughly entertaining.

It's a tale of two cities when it comes to the Democrats. Perhaps unsurprisingly - given Sander's young hip and tech savvy support base - Bernie is miles ahead of Clinton's social media game. We also had a look at Joe Biden just because at the time of writing Clinton's camp was nervously about a challenge from Joey Fingerguns.

Clinton came under a lot of fire following the hack on her email domain. With commentators comparing her Julia Louis-Dreyfus in the series "Veep," the Democratic frontrunner came out of the scandal looking like your mom when she writes in upper case on "The" Facebook (Chelsea winces). The email blunder reflects the overall uneven Clinton approach to digital strategy.

The site itself is functional, albeit unambitious, but completely misses the point when it comes social media leveraging. The social sharing looks like an afterthought, hidden away in a drop-down above the top-navigation. 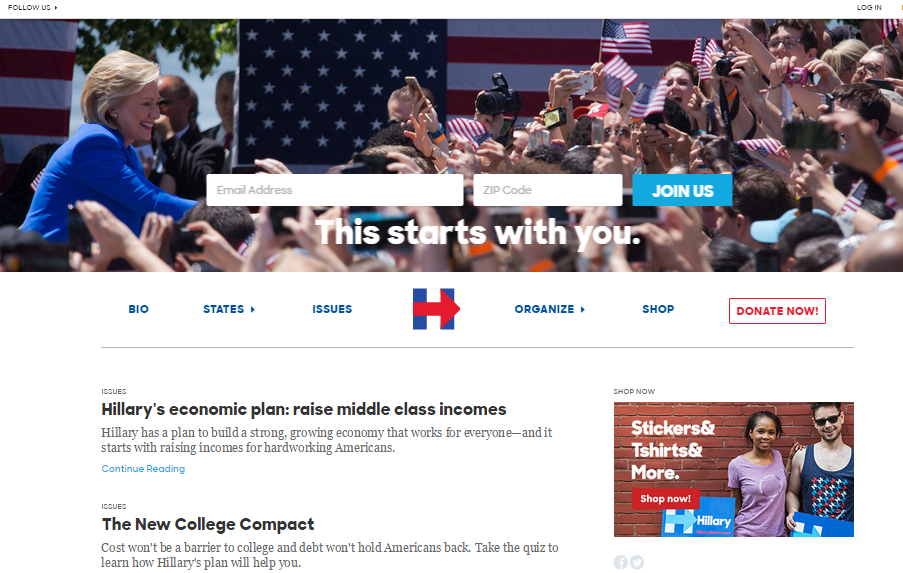 The site's calls to action almost make up for its social media failings. The calls are strong and a splash page directs the user to either join or donate. It's all that really matters. But then look at those two 2013 hipsters on her Homepage with their Ray bans and millennial smirks that slabber; "I was on the ground for Obama but cashing in on Clinton." Hillary, come on this is 2015 and you're running in 2016. You are running, right?

Her social media strategy looks like it comprises of buying bots in an attempt to get down with those young and trendy AI lovers. It looks like she's still using the same aides that screwed her over on the email domain and who figure that the key to social media is a mere numbers game. Hillary, you're trying too hard by not trying at all.

Clinton loses out to Sanders on social media muscle for the simple reason that it is exactly that; 100 percent social. It's a supporter led campaign driven by people on their own time using their personal Facebook and Twitter accounts. People look like they're passionate about Bernie. Passionate people tend to be younger voters and young people tend to get technology.

The unofficial campaign site, FeelTheBern.org, was launched by volunteer supporters after a "Coders for Sanders" thread was posted on reddit. It doesn't get much more hipper than a volunteer based site that sprung from a reddit thread. Sanders is the oldest candidate running in 2016 and would be the oldest president if elected. 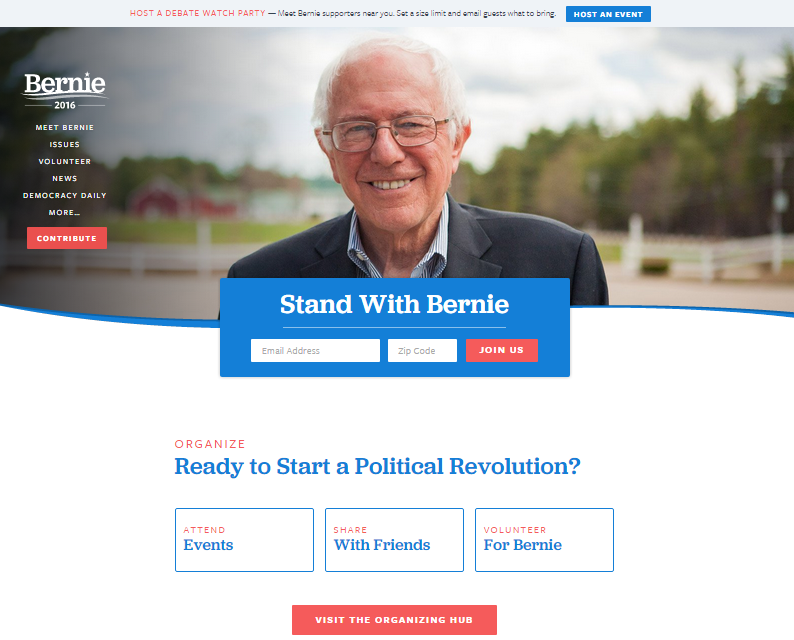 But it looks like the official campaign hasn't caught a whiff of the hot steaming pie waiting on the windowsill.

The site allows you to share the page on Twitter and Facebook but doesn't appear (I gave up looking and Googled "bernie sanders Twitter") to even link to Sanders' social media platforms. It's clean and has simple strategically placed calls for action but far from the revolution it touts. Bern, it's right there for the taking but you gotta join the dots for us.

Like Sanders, Joe Biden's (non)campaign is being run by the people. The difference between Sanders and Biden's campaigns is that the latter is more astro-turf than grassroots. It's run by William Pierce, a former field director of the Pennsylvania Democratic Party. He's on LinkedIn, we Googled him. It's a beautiful site and the forerunners would do well to poach William Pierce.

If anything else the sea of Republican candidates was good news for the local tech industry with designers and developers cashing in on presidential ambition. How well they fared is another story.

You can picture Trump foaming at the mouth and demanding his face take center stage at all times. Make America Great Again and make me another draft, again, again, again YOU SCHMUCK! They threw an exclamation mark into the logo just to keep him from imploding.

We like to imagine that Trump's site was the result of the coder's revenge with little Easter eggs hidden across it. Easter eggs in the shape of landmines. 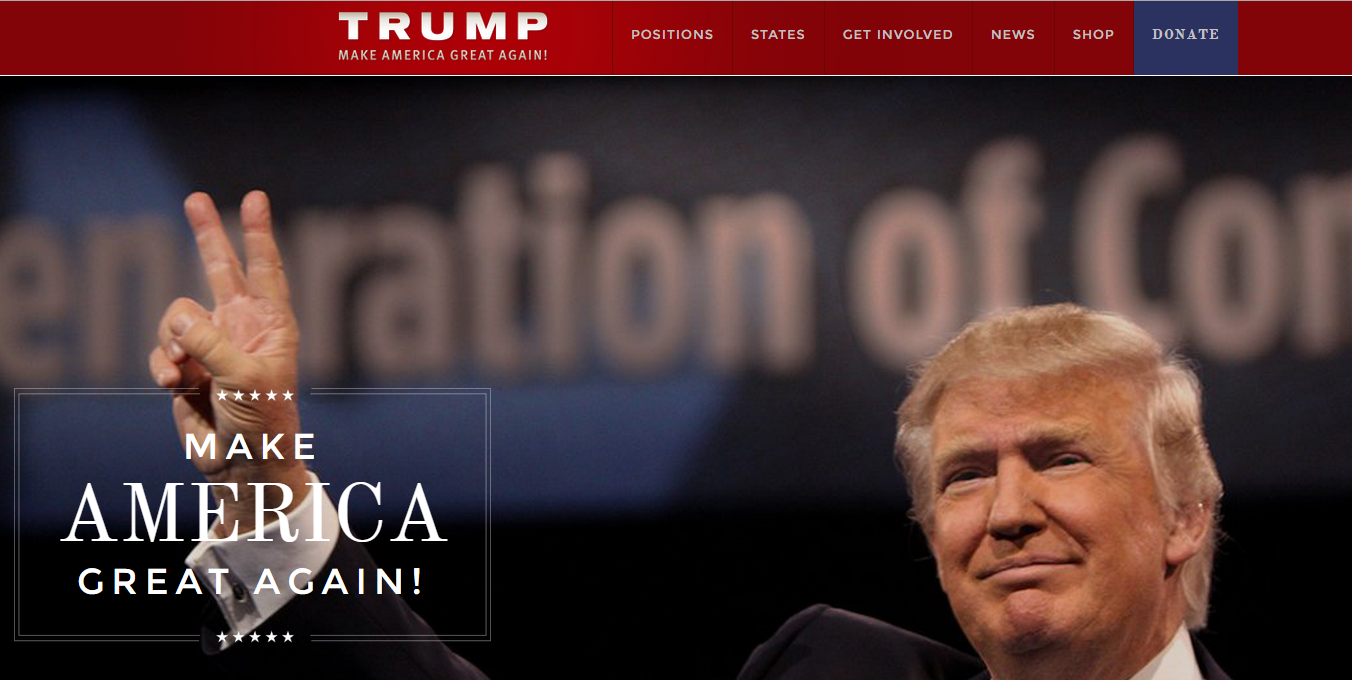 Even the category titles seem like a dig at Trump. "Positions" seems like a double-entendre Trump himself might crack during an inappropriate interview with Megan Kelly.

The site itself is of course responsive but if you zoom out in desktop it cuts of Donnie's head which is nice.

And the almighty whopper? The site uses Flash, yes it's using Flash for a 2016 presidential campaign! Just goes to show you that money can't buy you a clue.

How perfect is this: 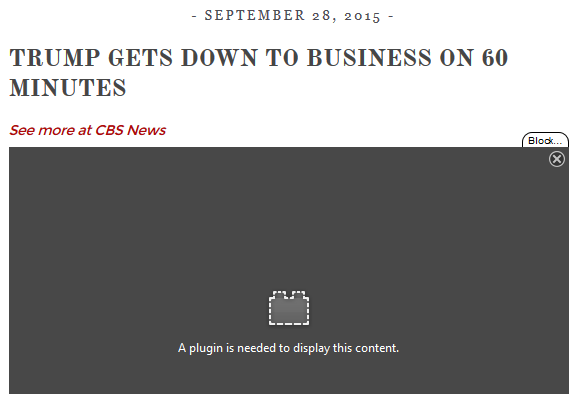 Donald's campaign looks like it's also busy buying bot friends over on Twitter, this audit shows over 1.2M of his followers are fake. Money can't buy you social love, Mr. Trump.

The inbound links seem to confirm that Trump's popularity is a joke that's got out of control. This is the most popular inbound link. You really couldn't make this stuff up.

All in all it doesn't stink as much as you want it to but is this really the best site and social strategy money can buy? Donald, a little free advice - "Sometimes your best investments are the ones you don't make."

Ben Carson's site and digital strategy fits soundly with Ben Carson and his stances. At first glance it looks pretty sharp, solid and well put together. They made a movie about this guy and all things considered it's actually not that bad.

But take a closer look and things begin to fall apart in epic fashion. Things were put together hastily and seem to confirm my suspicion that his entire candidacy is based on movie that has a score of 7.8 on IMDB. That's pretty good but it doesn't make you president.

The color contrast in the split between the image and petition is as stark and silly as suggesting Muslim "groups" should not have church status while John Oliver can. 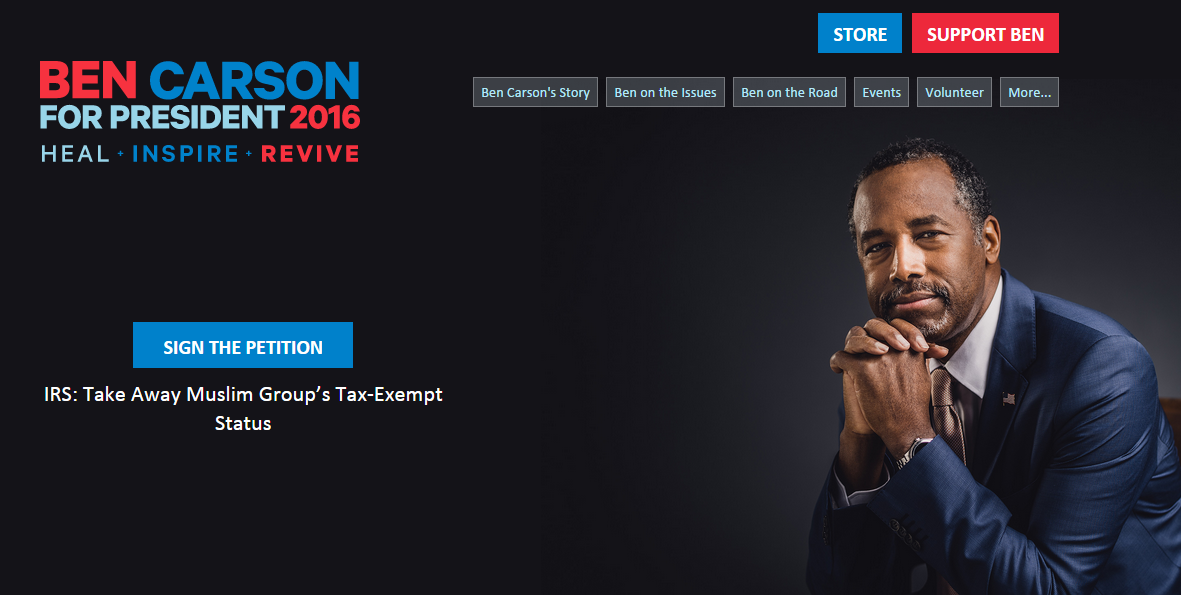 Scrolling down the Homepage you're bombarded with as many conflicting fonts as policies and check out that footer that's as large as the header. There's something you don't see every day.

When you see the two guys behind the campaign you begin to understand that they may not necessarily understand "the shares and everything." And guys please say "grassroots" again, I dare you.

Fiorina (or Carly to the electorate) has a tech background (some call it a questionable one) which shines through on a site that has gone down the path of fewer options the better.

It's a smart move that channels the user toward a donation or signup page. Having said that you come away feeling short-changed. You never really get to meet Carly instead you get a slick corporate slide show presentation. But who doesn't love slide shows? 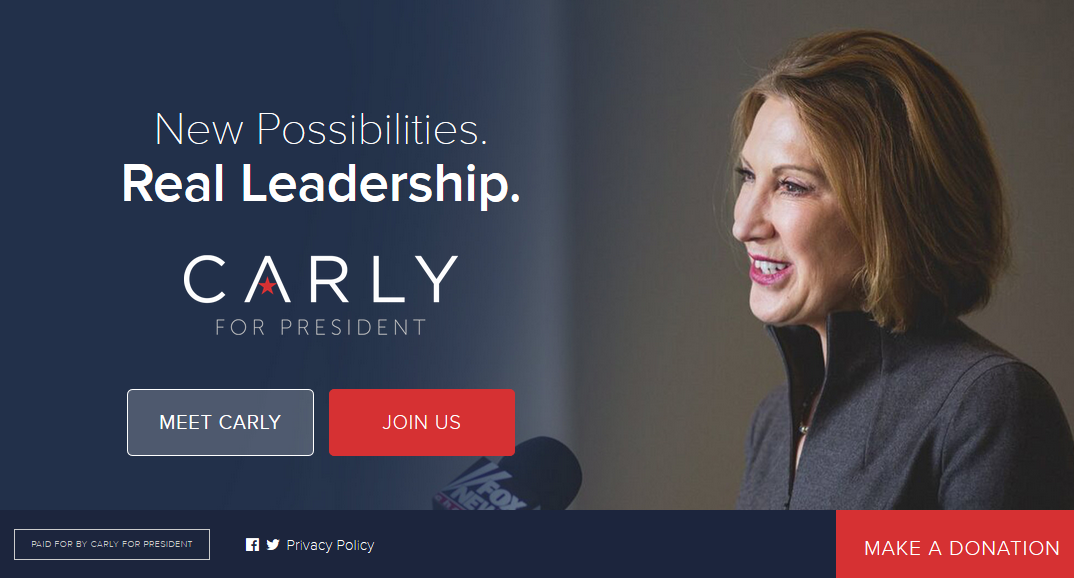 The dots haven't been joined when it comes to an online strategy beyond a site. The campaign makes a go of social media a lot like how HP made a go for iPod when she was boss. It's unimaginative and tries to piggy-back on the success of others.

Right now Carly's team is generically Tweeting and posting links to news stories, something that one of Clinton or Trump's bots could do for free. There's no insight or color when it comes to their strategy and this is what's really killing Carly. Her biggest challenge is presenting herself as a human being and that's exactly where social media could help her. For all his failings, at least Trump gets this.

Jeb or should we say Jeb! really doesn't look interested in what the guy from the Wizard of Oz has to say; "Yeah, yeah, yeah a little dog, ruby slippers and a wicked witch yadda, yadda, yadda. Did I tell you my wife is Mexican?" If anything I'm just really intrigued to know what the soup of the day is. French onion you say? I'm in.

Aside from the Nickelodeon-esque logo and bizzare image the site is well put together and functional. 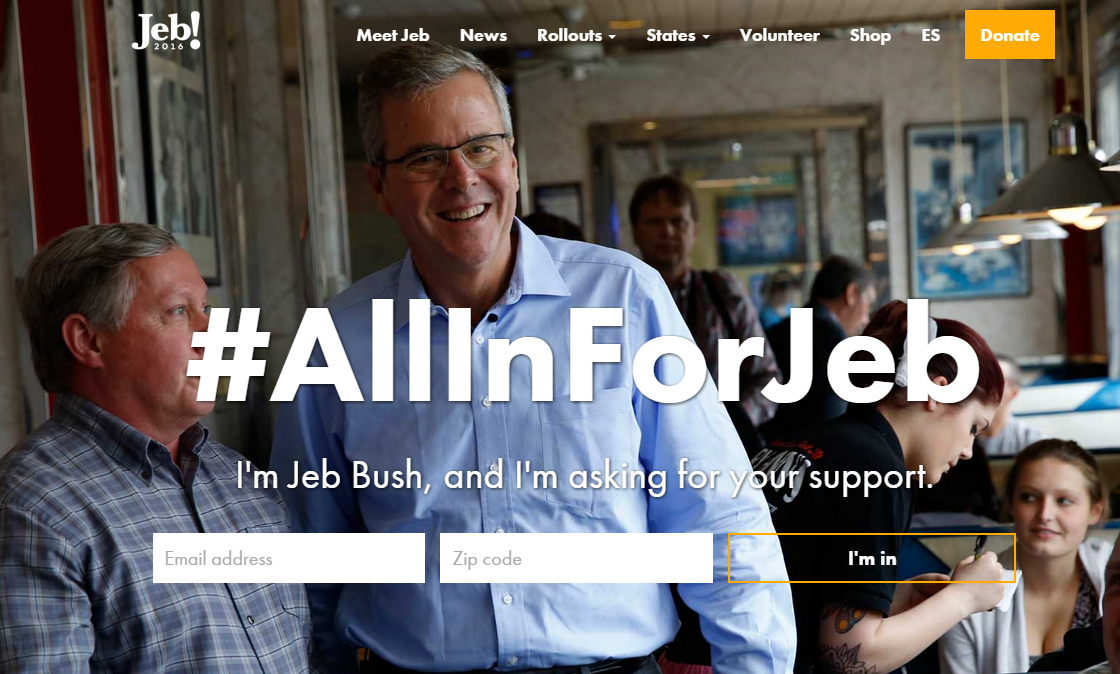 I implore you to look at the preview share image for the Meet Jeb section. Who is selecting these images? I also had to scroll to the footer for the Facebook page which might explain his lack of followers (you can use that excuse if you want, Jeb). The site does have a built in Twitter feed which comes in handy when you land on the Homepage and this is the whopper of a Tweet:

The site uses NationBuilder software so they're ahead of the game for the most part but they could be doing a lot more to coordinate local level engagement and activism like building local NationBuilder chapters and user generated content. 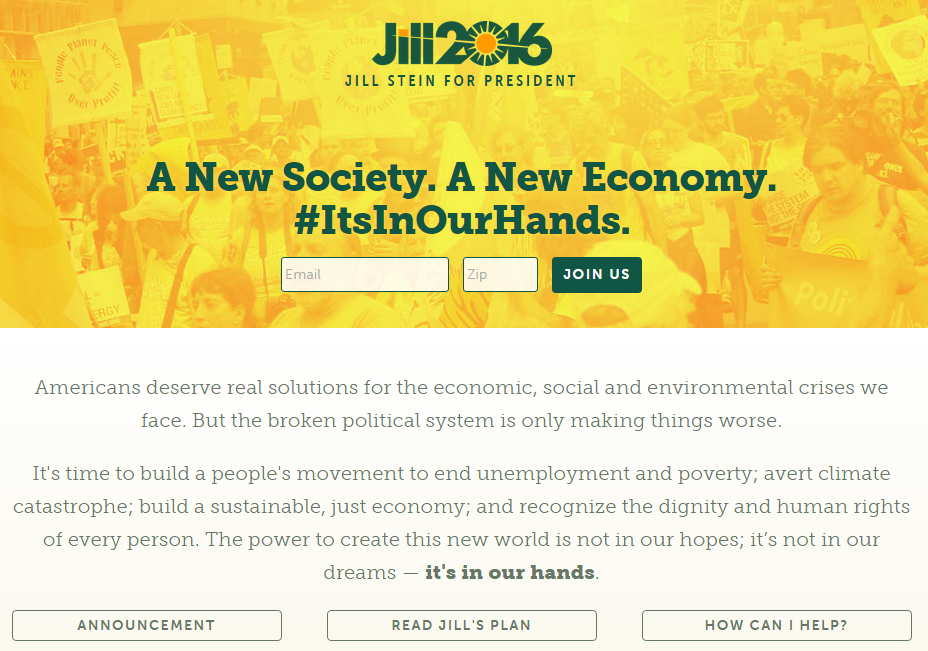 If you do use a hashtag on your Homepage then really drill this home by using the NationBuilder customizable sharing options so supporters can spread the same hashtag.

If Hillary wins the nomination, Stein will begin to get a lot more media attention as the only progressive alternative. She should put a little more love into her site beforehand.