Two decades into the 21st century, right wing populism and white nationalism have been on the rise in the United States, encapsulated and exacerbated by the presidency of Donald Trump. The presidential and legislative elections in 2020 represented an urgent moment to check the spread of nationalist authoritarianism in America and chart a new course for multiracial democracy in the country. As the only national Jewish organization focused exclusively on progressive social change in the United States, Bend the Arc mobilizes progressive Jews across America to fight for racial and economic justice for all, by working in deep partnership with directly-impacted communities. They work to elect leaders who share their values, mobilize communities around the country to dismantle white supremacy, antisemitism, and anti-Black racism, and win policies that invest in the well-being of all people in America at the federal, state, and local level.

With an incredible communications staff and deep roots in organizing, Bend the Arc is a force to be reckoned with - but with a small team relative to the vast challenge of white nationalism and antisemitism during and after the Trump years, questions remained as to how to scale the organization’s impact through digital tools. By joining forces, Tectonica became an extension of Bend the Arc’s digital team, working side by side on an ongoing basis to punch far above our combined weight and make a huge difference in the most pivotal year American politics has seen in at least a generation.

“Where can you find someone to design a gorgeous homepage that also supports your theory of change? The Tectonica team. They’re experts in making your digital tools run beautifully, correctly, AND impactfully.” 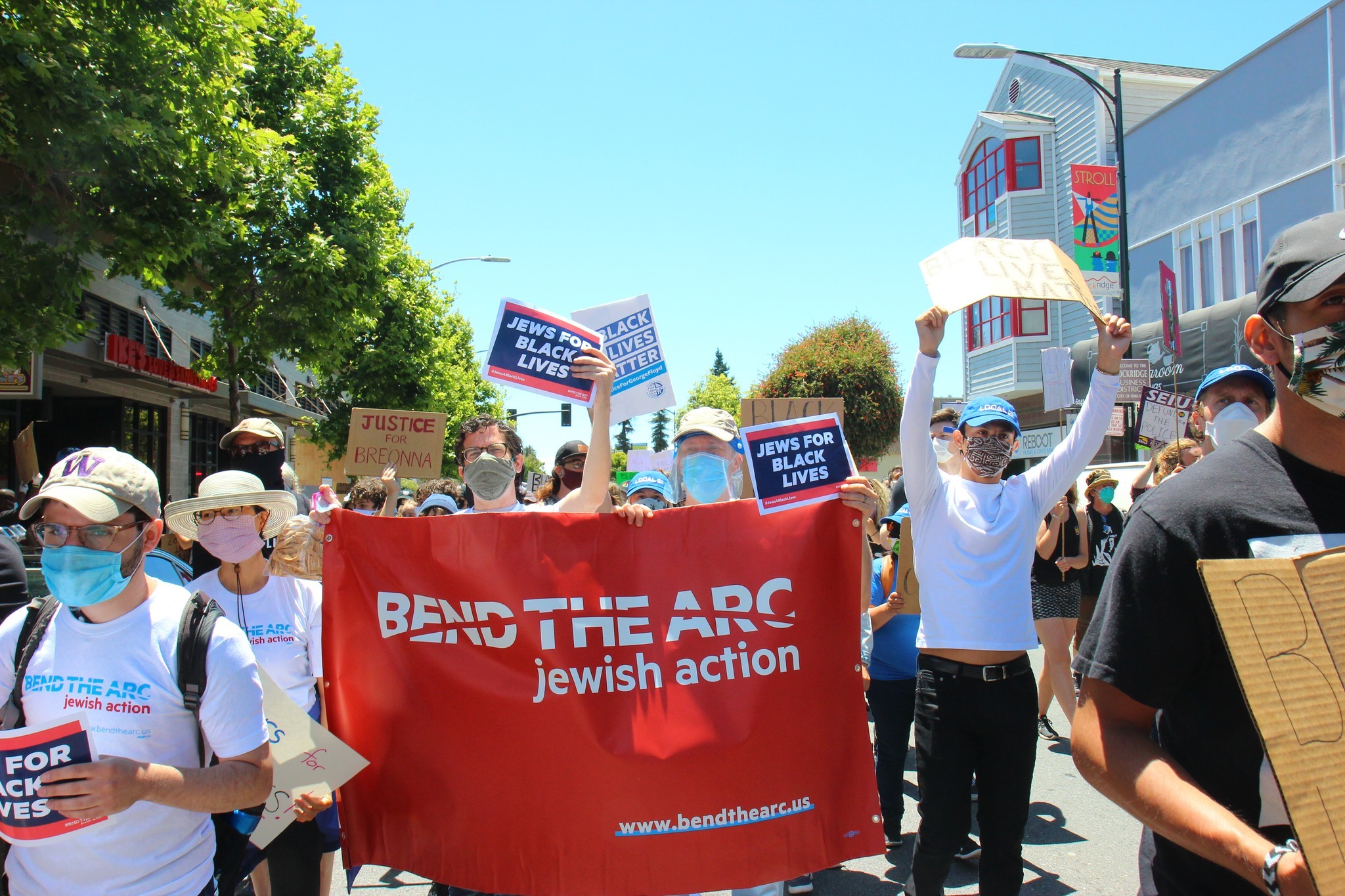 In 2018, Tectonica and Bend the Arc began collaborating under our flexible Account Services. With this arrangement, Tectonica is in a position to strengthen a client’s digital campaigns and expand their capacity with support for fundraising, organizing, small-group organizing tech and strategy, branding and design, and building web tools. In this model, Tectonica can respond and adapt quickly to shifts in strategy, and is on hand to rapidly develop new resources, implement new advocacy campaigns, and scale the work using digital methods. Because Bend the Arc already had a website in place, Tectonica focused on redesigning parts of the site, supporting the organization’s campaigns, strengthening and unifying its visual identity, and empowering it to respond to new challenges with scalable and sustainable digital solutions. 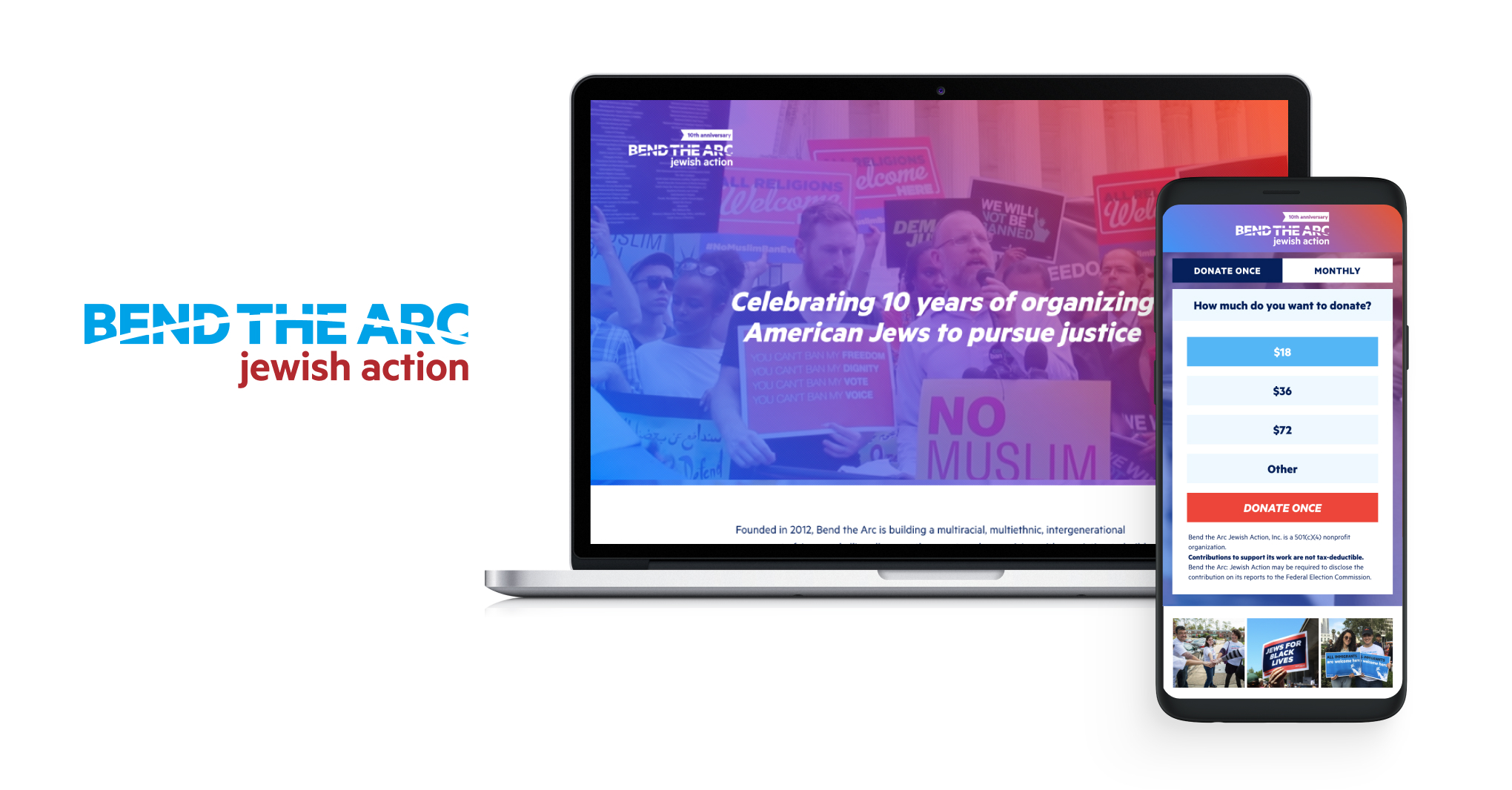 Some specific examples of our work over the years with Bend the Arc:

1. PAC Website: Working to Elect Champions for Democracy in Government

It is standard these days that US organizations operate as a group of legal entities with a similar mission and related brands, but with different operational directives (political, non-profit, PAC, etc). Leveraging our experience collaborating with non-profit groups advocating causes in the U.S. political system, Tectonica worked hand-in-hand with Bend the Arc to streamline efforts across the separate entities advocating for a safe and free future in America while making sure to adhere to strict internal procedures and compliance requirements.

Central to Bend the Arc’s work to make the United States a place where everyone can thrive, regardless of race, ethnicity, religion, or origin, is electing representatives who share a belief in that future. To that end, Tectonica put together a website for Bend the Arc’s PAC designed to build support for candidates in line with the organization’s vision. The site, integrated seamlessly with ActBlue to facilitate fundraising, presented visitors with a wide array of options for giving either to individual candidates or to the full list of endorsees supported by Bend the Arc’s PAC. With the help of the website, The website helped facilitate Bend the Arc Jewish Action PAC’s 2020 successes, including:

in total for progressive candidates in critical races

endorsements were victorious, flipping control of the Senate 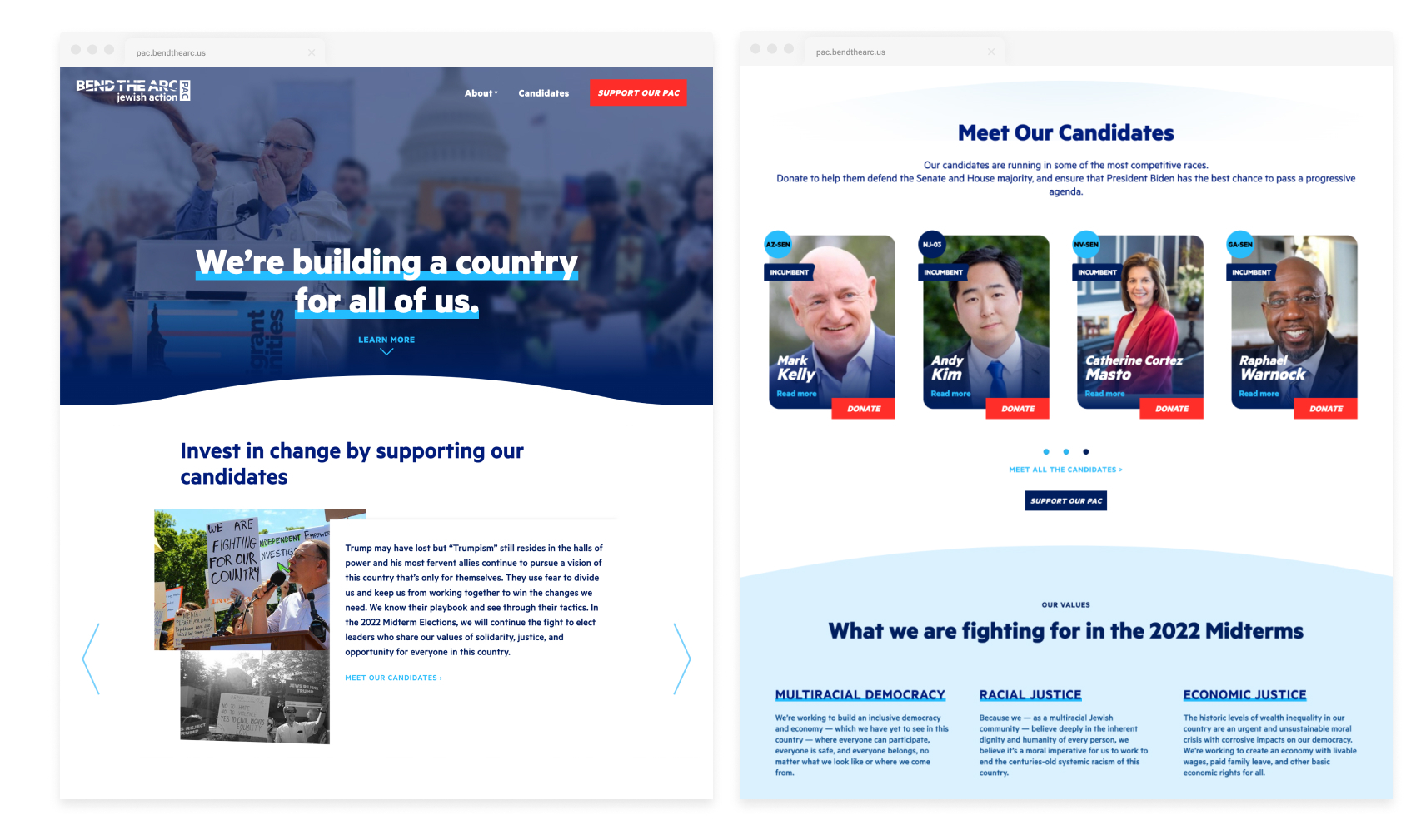 Tectonica helped Bend the Arc strengthen its work on the ground and align local chapters’ web presence with the organization’s overall identity by creating a new reusable microsite structure. This structure, which elevates the user experience and general look and feel, also substantially eases the work of local volunteer administrators without technical expertise (or time) to keep their web presence up to date, allowing them to more efficiently fight for Americans’ shared liberation, and build a country that works for everyone. 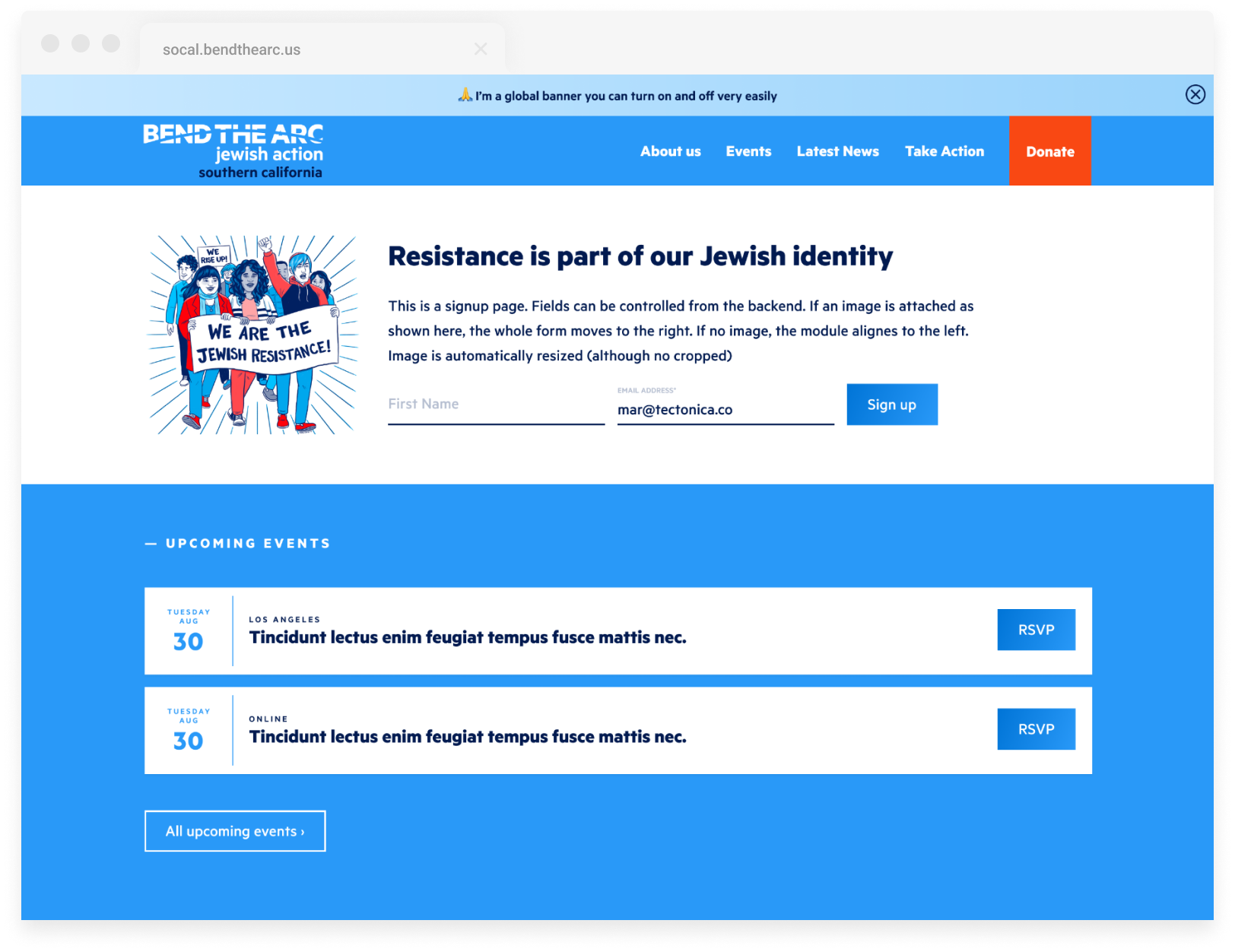 In response to the 2020 Republican National Convention, a high-decibel primal scream of anti-democracy conspiracy mongering and white grievance politics, Tectonica worked with Bend the Arc to build The Republican Nationalist Convention, a parody website put together almost overnight which cleverly and poignantly made the connection between many convention speakers and white nationalism.

“The best part, however, is arguably the site’s FAQanon section, an early-2000's Geocities-esque page with a handy-dandy primer on the rapidly spreading conspiracy theory embraced by a genuinely shocking amount of Republicans.” 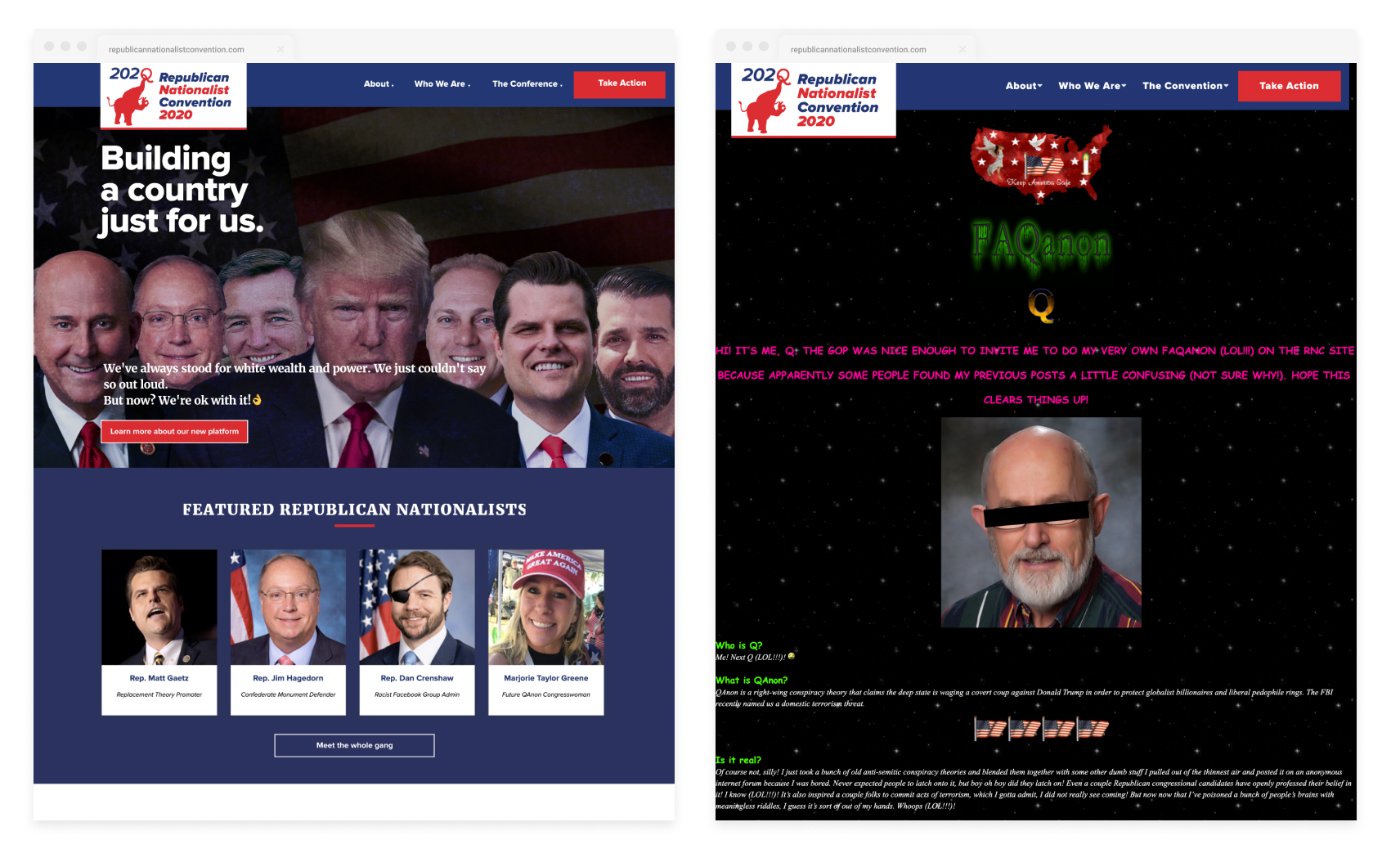 As part of our work together, Tectonica built Bend the Arc a landing page kit, which empowers the organization to create modular landing pages complete with timelines, sign-up forms, and other such features. This tool, which Bend the Arc’s Digital Director Michelle Reyf called “a game changer,” dramatically expands the organization’s digital capacity by allowing them to respond quickly to changing events. Some examples of pages built with the modular landing page kit include the 10-year anniversary page, the We Rise As One page outlining the organization’s work in 2020, and the Jews For Democracy page to drive action in the immediate leadup to the election. 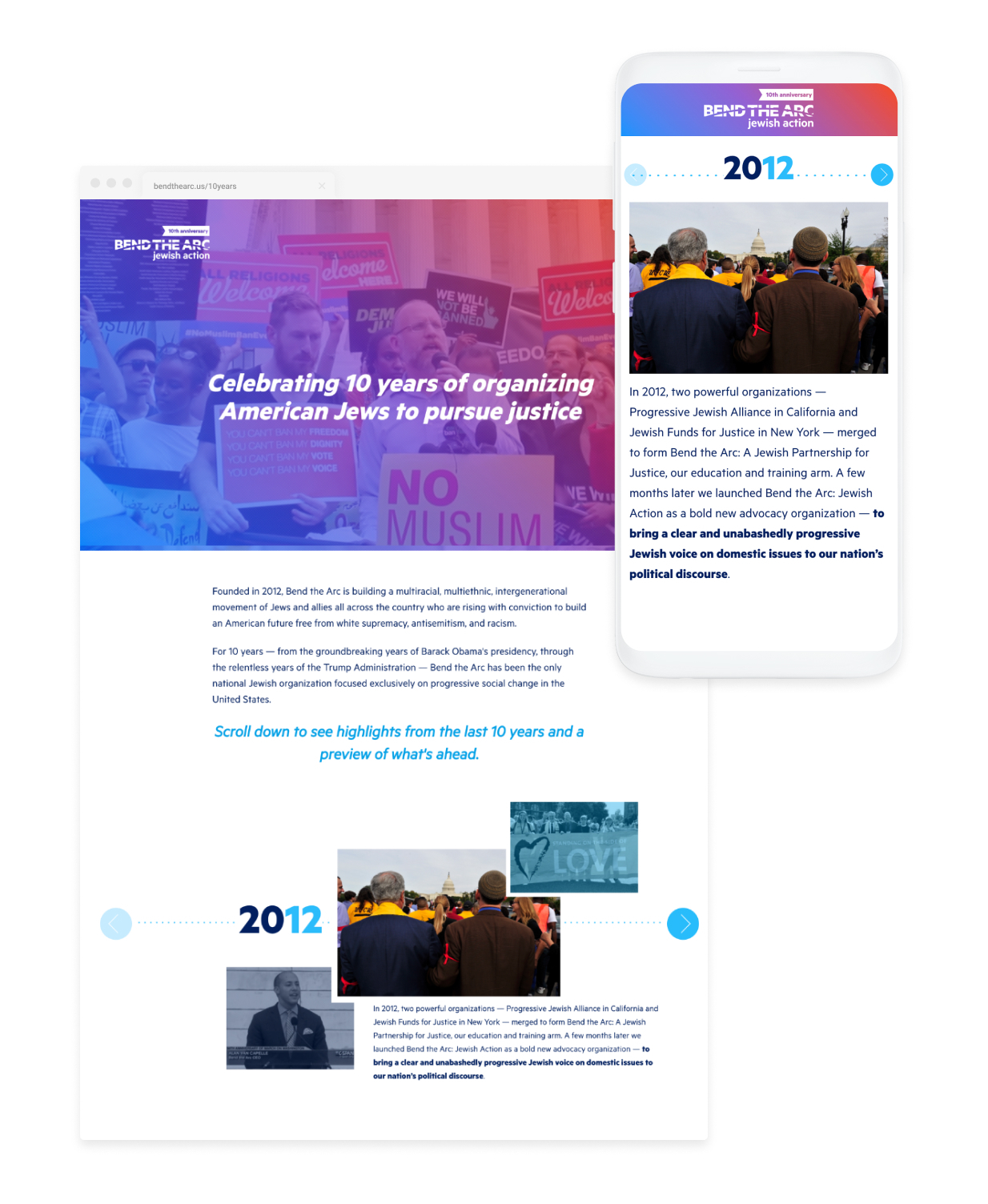 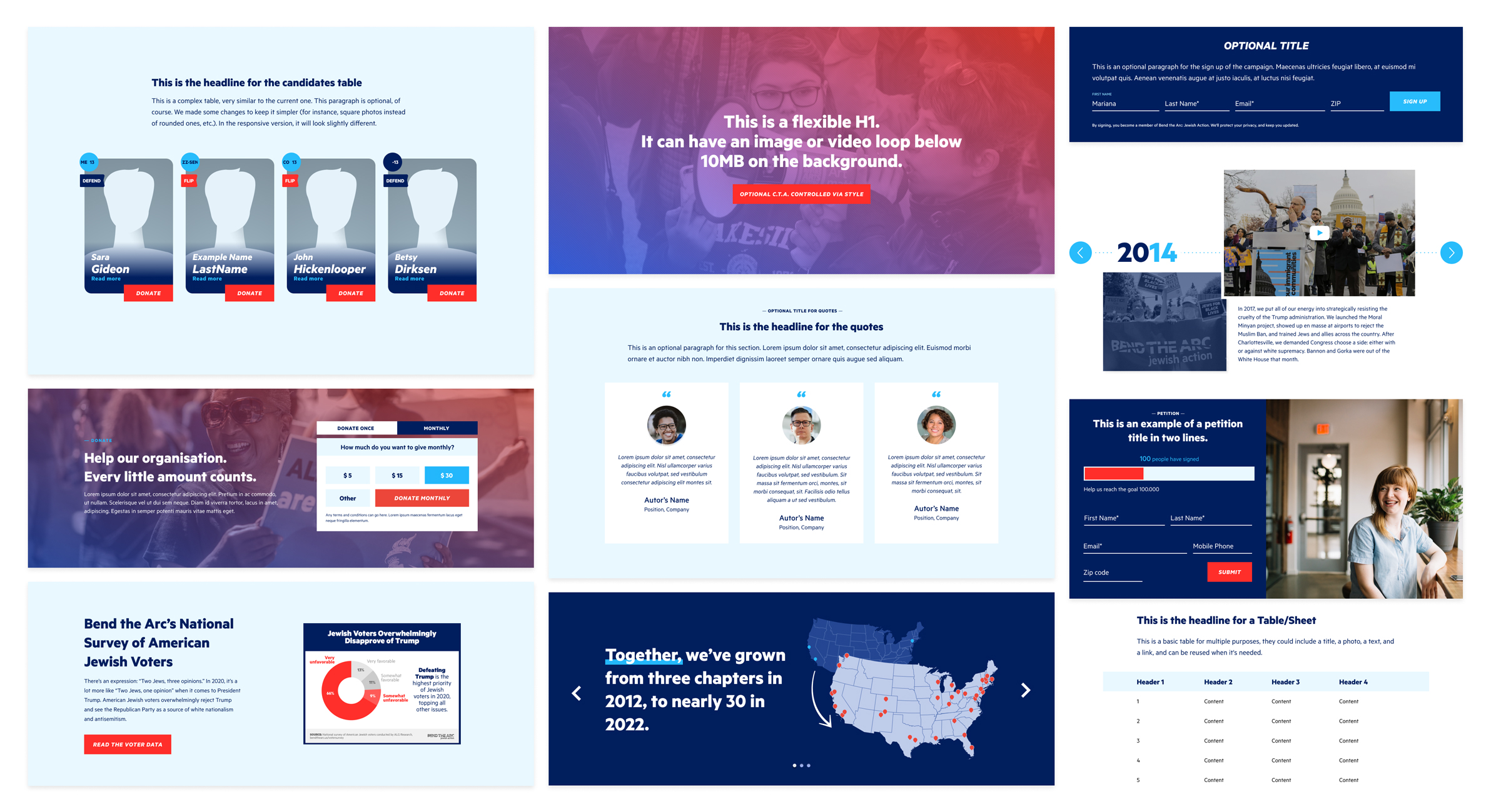 In 2020, Bend the Arc volunteers were critical to winning this election:

postcards and letters sent to voters in swing states, many of whom were targeted by voter suppression

Jewish voters voting for Biden in 2020

campaigns and local groups working directly with them

The organization helped win a historic vote margin for President Biden with 77% of Jewish voters — a seven point increase from 2016.

Through years of our work together, Bend the Arc has continued to punch above its weight and dramatically strengthened its digital presence.

“We’re grateful to work with the talented, passionate team of techy changemakers at Tectonica. Digital organizing involves making many tools talk to each other — Nationbuilder to ActBlue to Zapier to New/Mode and more. Tectonica makes those tools look great on the outside — branded and easy to use — and work seamlessly on the inside — collecting key data and speaking across platforms. We don’t have to worry about trying new things because Tectonica will develop the tools to make it work, and we don’t have to worry about existing things breaking because Tectonica responds quickly to get things running smoothly again.”

This cooperation has led to direct, tangible results. Increases in fundraising and volunteering helped lead to historic electoral successes, including a substantial increase in the Jewish vote for President Biden. These victories form an integral part of Bend the Arc’s efforts to push back on the spread of nationalist authoritarianism in America. Tectonica continues to support Bend the Arc in those efforts, working now to redesign Bend the Arc’s homepage and action center.