In the wake of a groundbreaking report on gender discrimination in politics Tectonica is partnering with the report’s creators Atalanta to offer WinningWomen: a solution to assist women candidates to overcome gender-based discrimination and win representation in government.

The fact that women are underrepresented in most every government on earth stands as an undeniable and unacceptable reality of our world in 2018. The laws which govern our societies were made predominantly by men and continue to be so today. While representation in policy-making is just one component of the patriarchal exclusion women face, with the overwhelming lack of female representation in government, it is no wonder we continue to live in a world plagued by sexism.

However, it’s not simply a matter of women candidates receiving votes on election day. Women face additional challenges in the very processes of putting themselves forward to break through the glass ceilings of governmental representation and in their leadership when they hold office. This comes in the form of female politicians having their policy messages derailed by judgements and discussions on their physical appearance, marital status, and whether they have children - in a way that their male counterparts do not. Additionally they face unequal derogatory language related to their gender, and greater questioning of their competency and ability.

The advent and influence of digital tools such as Facebook, Twitter, and platforms like NationBuilder on campaigning and governance in our internet age have allowed a great opportunity to engage constituents directly into political dialogue. Social media has also brought the onslaught of gender-based discrimination in the way women politicians are discussed and talked to into a more open and public forum for all to view. The flip side to this is that there is also a clear set of data to show exactly the extent to which this discrimination exists. As well as some clues as to how to overcome these issues. 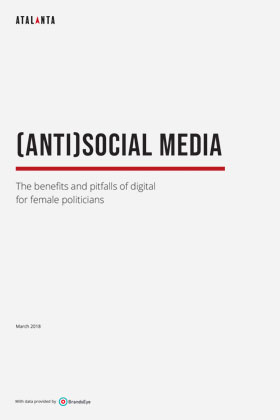 Atalanta in partnership with BrandsEye, an innovative opinion-mining company, conducted a thorough analysis of the online discussions surrounding three female politicians and their male counterparts: Theresa May in the UK, Nkosazana Dlamini-Zuma in South Africa, and Michelle Bachelet in Chile. The new report, “(Anti)Social Media: The Benefits and Pitfalls of Digital for Female Politicians”, shows:

• In gendered conversations about political leaders, male authors dominated the conversation, contributing at least twice as many comments as female authors.

For us here at Tectonica simply identifying the problem is not enough. We’re solution-focussed by our nature. Whether that means developing an online image of Sadiq Khan in his mayoral run to be the first Muslim mayor of a major European capital or helping France’s new president with no pre-established party win 60% of the seats in the National Assembly, or assisting current congressional candidate Virginia Madueño to connect online with the constituents about the issues that matter to them, here we get things done. 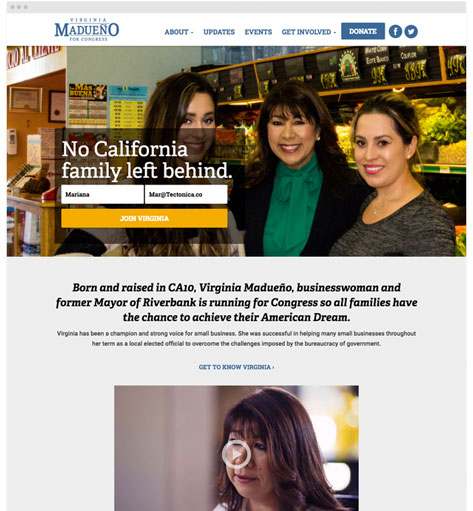 In this spirit Tectonica is proud to partner with the visionary women of Atalanta in provided a service specific to women candidates. Tectonica’s WinningWomen theme on the NationBuilder platform offers an ideal solution to support women worldwide in their campaigns to hold office. In addition, consultation services provided by PowerThru brings their years of powerful online fundraising, list-building, social media and online advocacy  to the table for candidates who need that extra push to get on top.

Now’s the time for women to win. Check out more about WinningWomen here.