of sites and landing pages

With the fate of Brexit and the leadership of the UK at stake, the 2019 General Election was an important one, to say the least. From the polling data, it was clear that there was a near zero chance of a Labour majority, and a Labour + SNP majority was also extremely unlikely. A hung Parliament, however, in which Liberal Democrats and smaller parties held the balance was potentially achievable.

The problem was that a lot of the party campaigning lacked a ruthless, strategic focus. It was clear that many people were not happy with the direction of the Conservative Party under Boris Johnson’s leadership, but not enough was being done to reach those persuadable voters to convince them to vote against the Conservatives. The campaign saw a clear opportunity to make a greater impact by focusing in areas with battleground seats; the biggest threat to Conservatives was in these marginals.

One major challenge for Labour was that Boris Johnson’s party realignment around “Get Brexit Done” was a much more effective message than any of Labour’s fraught attempts to find a common denominator amongst supporters. Targeted messaging was crucial to talking to key populations in a way that resonated with their experiences and their extremely valid anxieties about the future of the UK, but few were engaging in this kind of voter outreach. We wanted to lay out clearly for voters how a Conserative win could have a real and negative impact on their lives.

While Tectonica’s expertise is in digital organising and less on messaging (after all, our motto is #OrganisingOverMessaging), we were excited to join forces with SweetSpot to employ our expertise in creating effective designs for Advance Together’s campaign to engage voters with strategic messaging to curb any potential electoral gains of the Conservatives.

Our mission to persuade undecided voters was based on the premise and hope that by focusing on finding common interests even amongst people who tend to vote along different party lines, we could convince undecided voters to vote against the Conservatives. It was important that we push traditional conservative voting groups to ask themselves whether the Conservative party still represented their interests and present them with reasons why we believed they didn’t. We wanted to think strategically about how to use those commonalities in a messaging campaign to achieve our electoral objectives. With this goal in mind, SweetSpot and Tectonica came together to combine their respective expertise in effective messaging and visual communication to embark on a campaign to stop the growth of the populist right in the UK. While we knew from the start that we wouldn’t be able to stop the inevitable, it’s clear that without our efforts, the Tories would have gained much more ground. The results of our strategy were proven to be effective and we strongly believe these tactics should form part of any electoral campaign strategy.

“Working with Tectonica made what we did during the 2019 General Election come alive. Without the vision and creative talents of Tectonica we would not have had the extraordinary impact we did in a tough context, with tight budgets and even tighter time scales. It was a pleasure to work with the team and we are thrilled to be able to continue that relationship with Stand for Something.”

81 seats in England and Wales were identified where we saw opportunities for wins for Remain candidates. 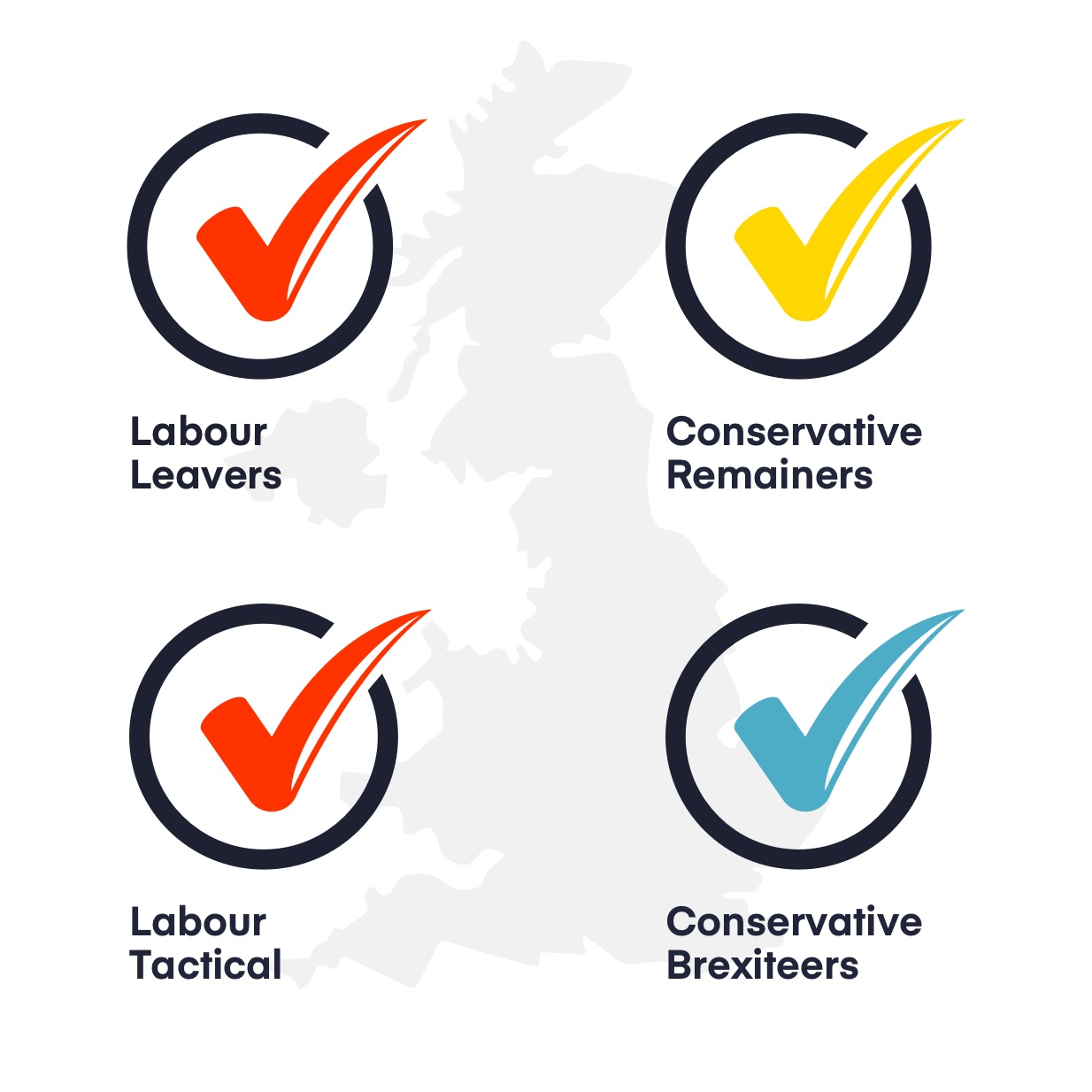 Because our objective was to achieve a hung Parliament, which we saw as the most realistic possible positive outcome, we decided that our efforts would be best spent attempting to persuade swing voters, split the vote, and boost pro-Remain moderates.

We focused our goal on targeting segments of swing voters for each marginal seat and defined campaign themes and a tone that would appeal to them. We also presented several variations of each message, refining the message at each iteration according to live campaign feedback, in order to identify the strongest message.

We identified issues likely to persuade segments of the current Conservative electorate to vote for a different party. In certain circumstances, our objective was to siphon Tory votes to the LibDems. In others, it was to encourage them towards the Brexit Party to reduce the conservative vote share

We provided world-class digital campaigning services to moderate candidates with a reasonable chance of winning, helping to mitigate the impact of pro-Brexit campaigning in their constituencies 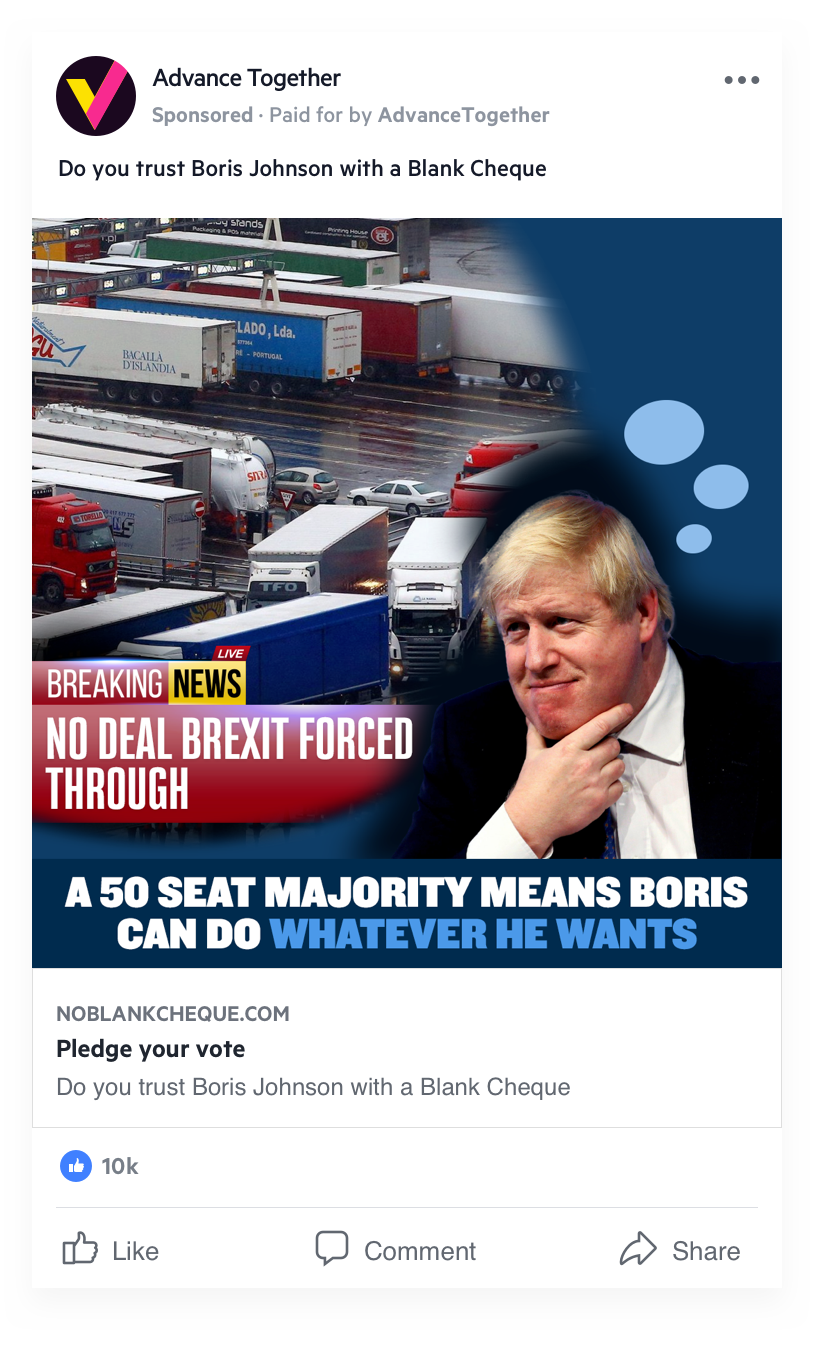 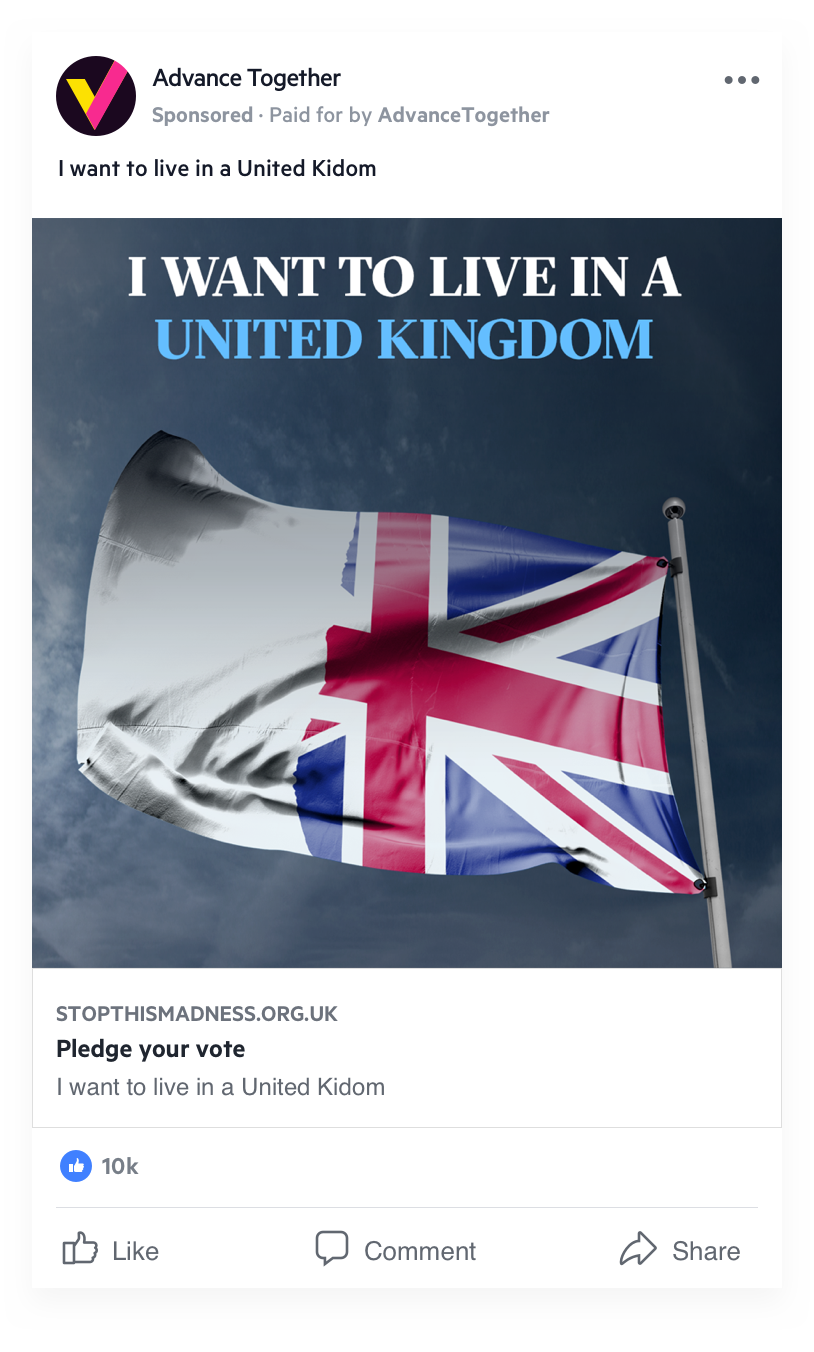 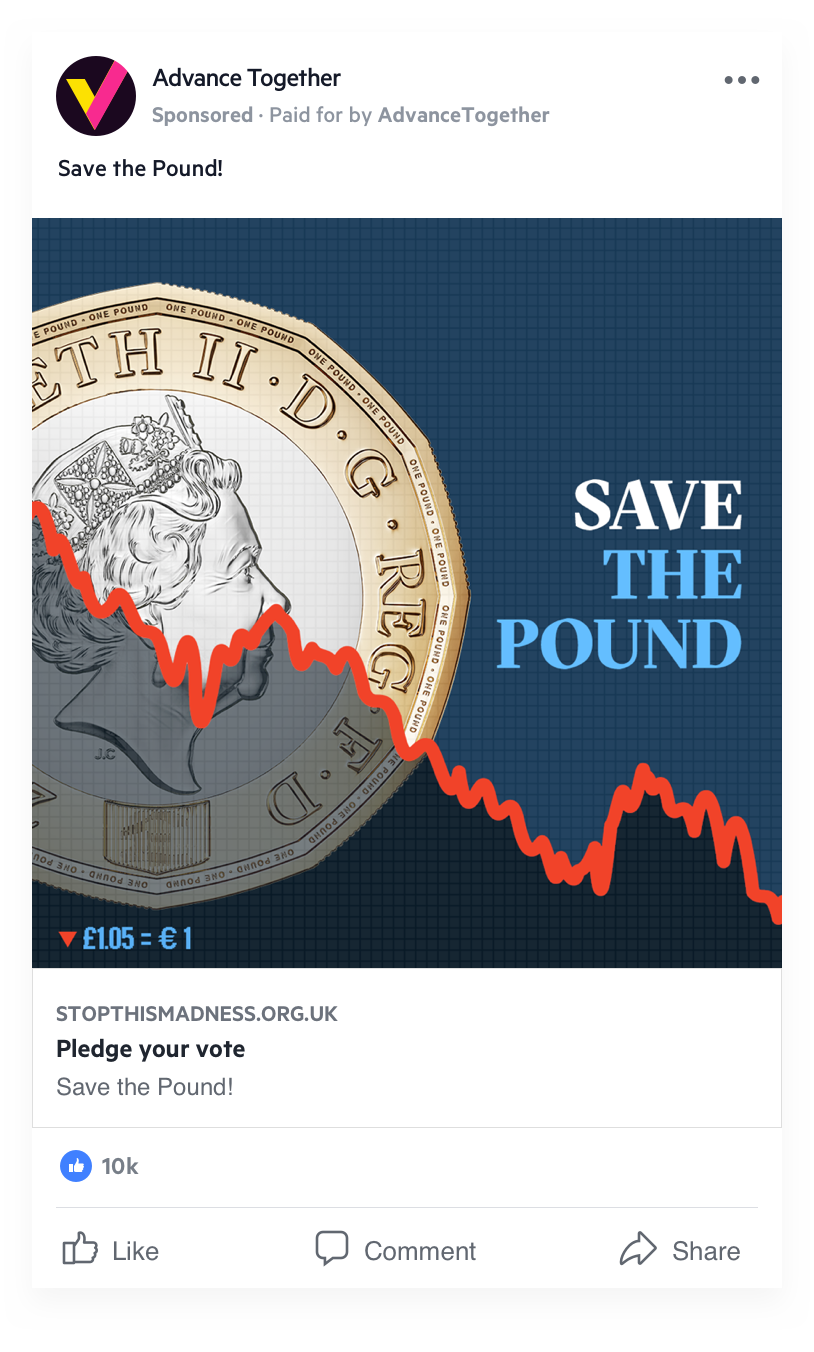 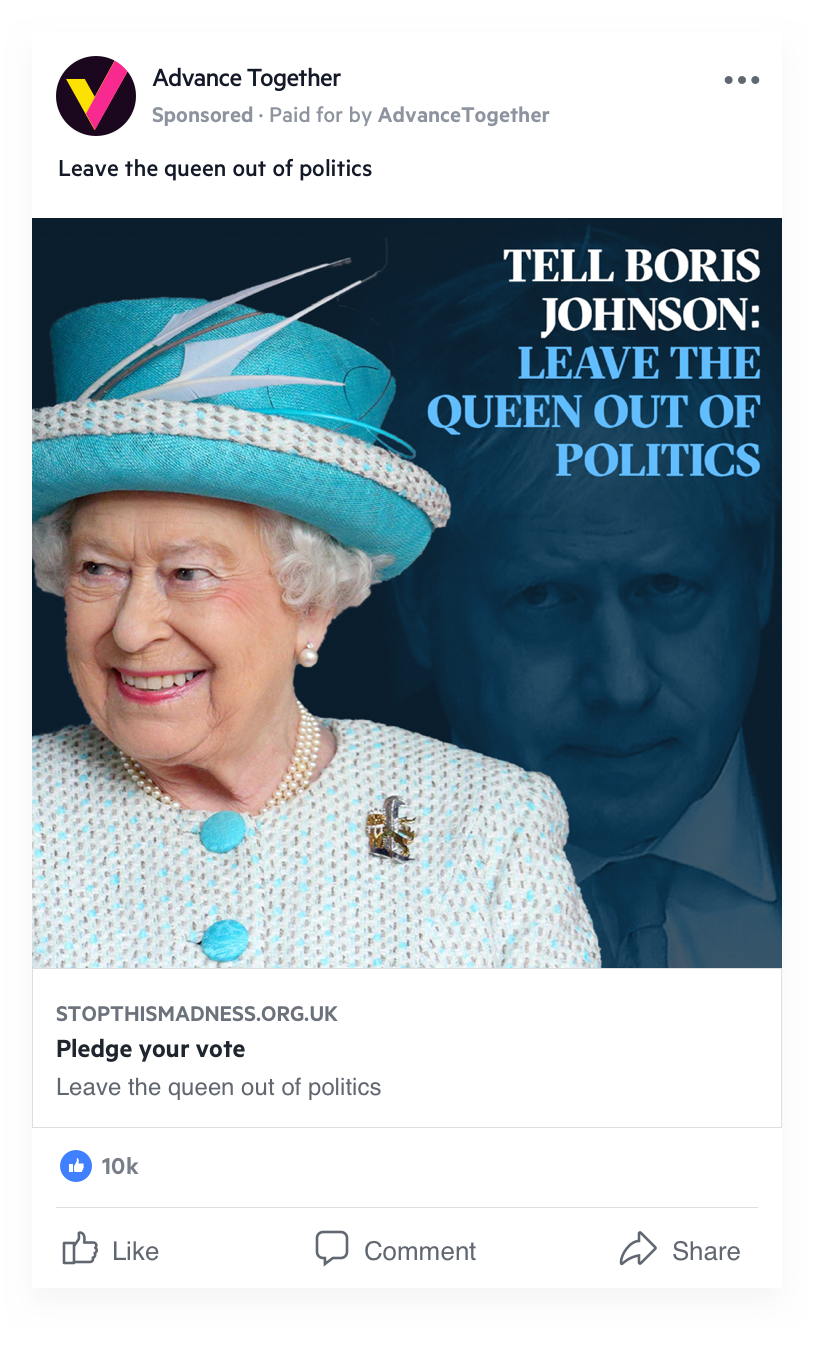 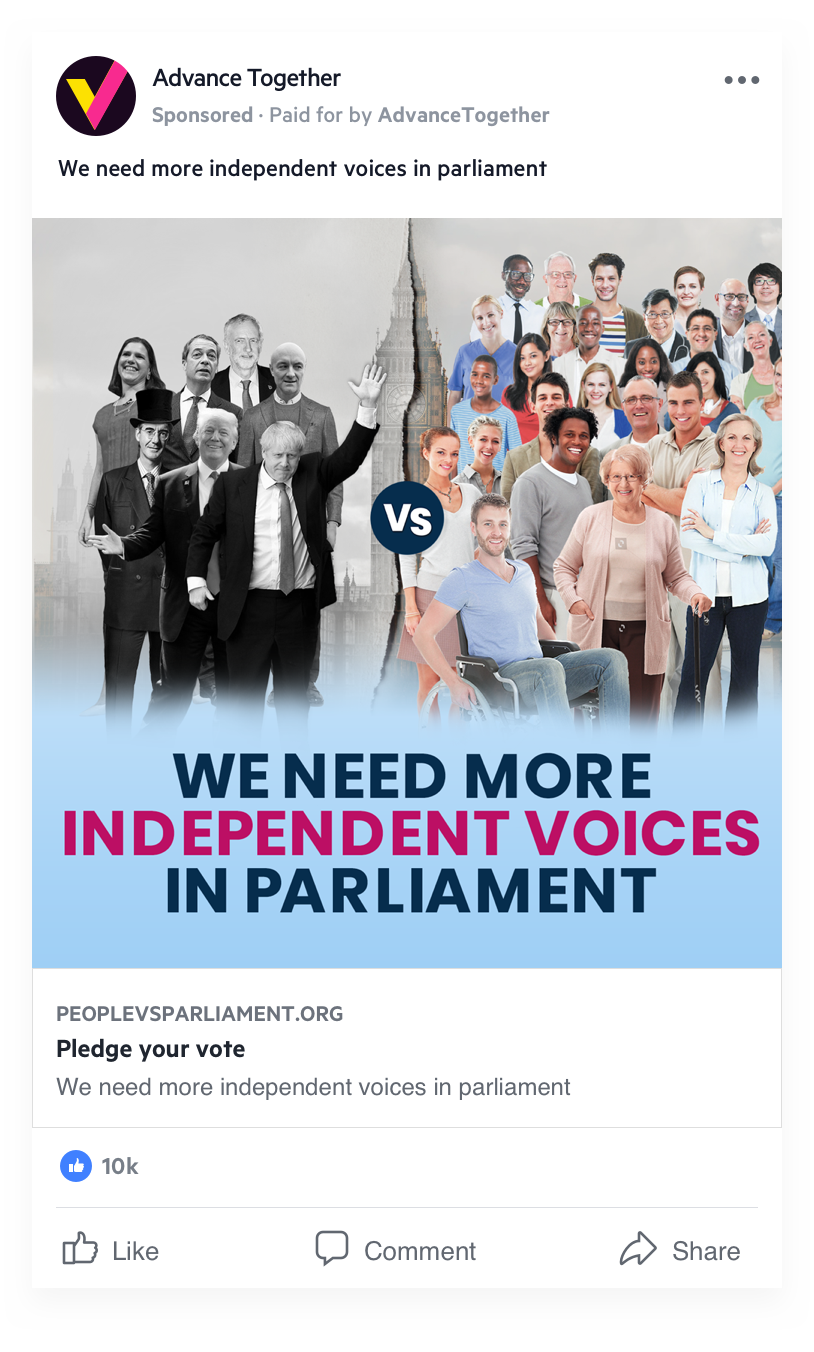 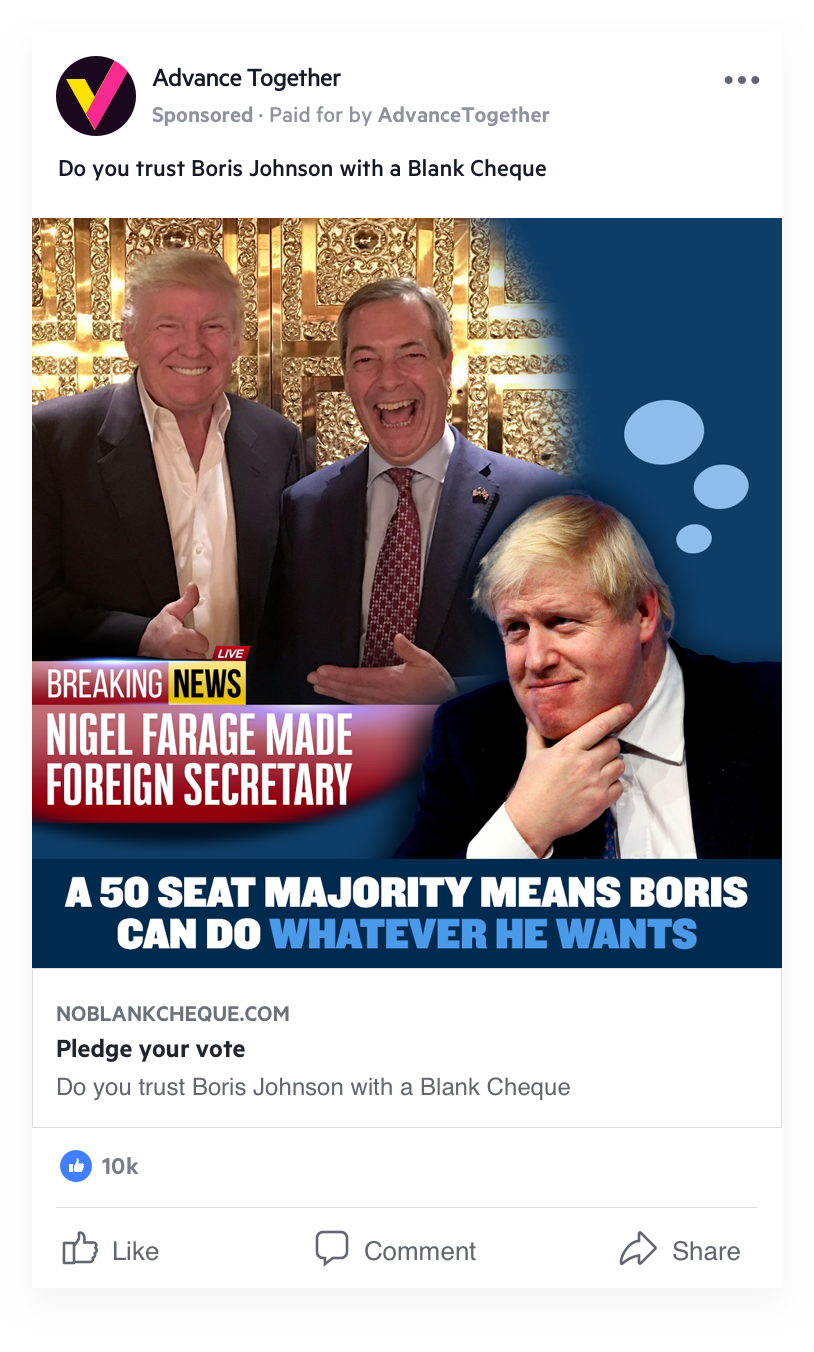 We engaged voters on Facebook, Instagram, and postal mail. All our messaging involved relevant targeting as opposed to excessive micro-targeting. We used publicly available data to map these voters down to a targetable postcode level. These are postcode-sector level "heat maps" of where voter types live.

This is our USP, it allowed us to run postcode sector level micro-targeting to move the right voters in the right direction to stop a Brexit majority.

We used the tools at our disposal, including a political party “Advance Together”, creating what effectively worked as a Super PAC that complies with all relevant Election law. Our work was efficient and effective. It far outperformed industry averages and results showed a clear correlation between where we worked and election outcome. Our only restraint in the UK General Election was scale.

Tectonica worked around the clock to create targeted websites, each one with multiple landing pages and hundreds of thematic and regionally specific adverts. The small team at Tectonica also quickly tested and reacted with new variations, with everything happening in a very short time span. These adverts would show not only specific text, but unique graphic content the constituency would immediately recognize as local and of high emotional value.

These ads were disseminated on Facebook, Instagram, and through postal mail, and were all associated with unique websites and landing pages with a specific narrative and aesthetic appeal that reflected the above mentioned ads, all created around the specific demographics of the target audience. Tectonica was super agile in creating multiple designs and our small team worked around the clock to test and react with new variations. Our designs were hyper-local nationwide. 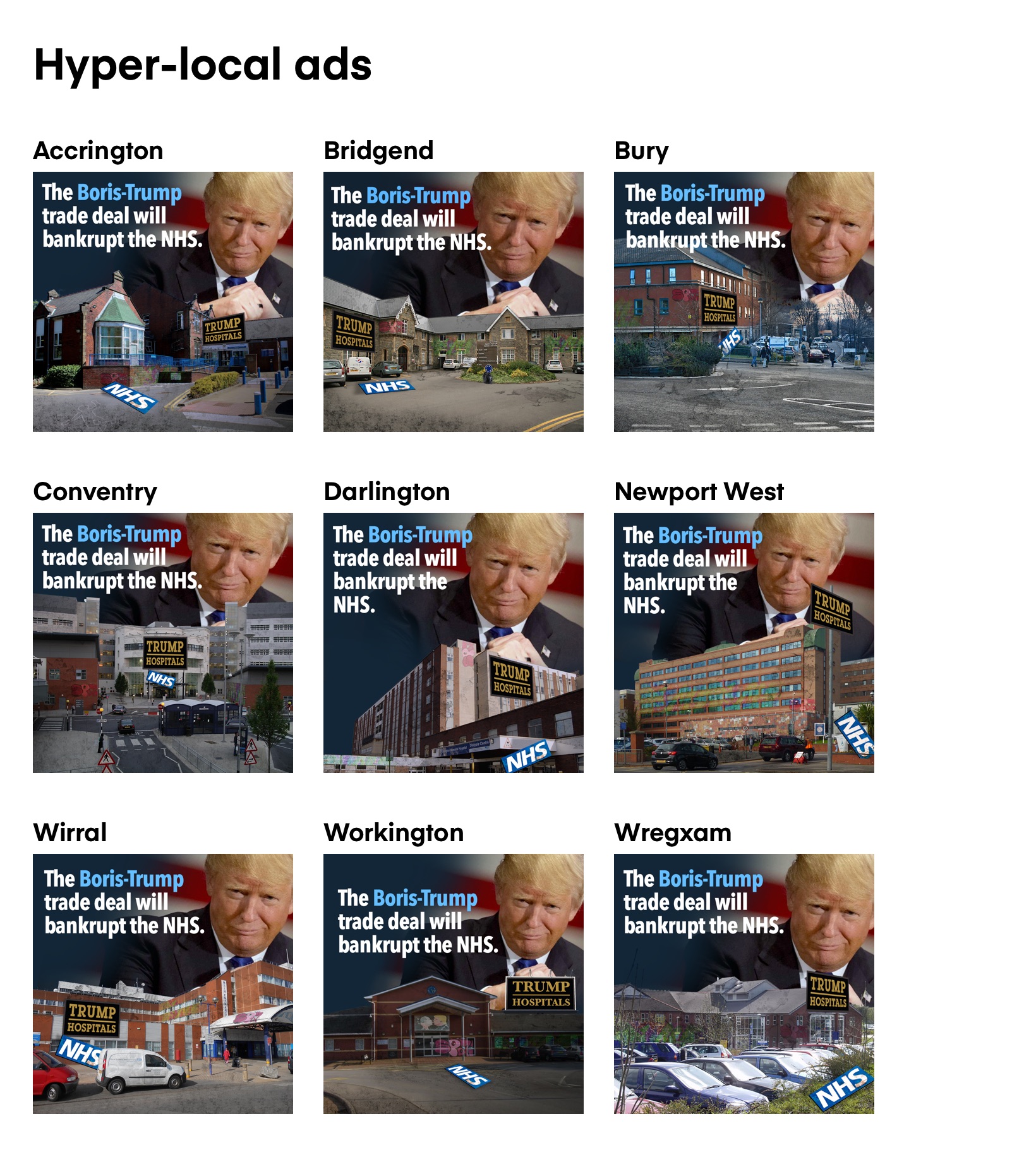 We predicted the outcome - and voter movement - without a costly, time-consuming MRP or poll. Our work far out-performed industry averages. Our only restraint was an ability to scale.

We focused our efforts on trying to effect change in the outcome of the election, unlike many who were focused on trying to predict the outcome without trying to change it. The Liberal Democrats and Labour ran disastrous campaigns and it’s clear would have done even worse without us. 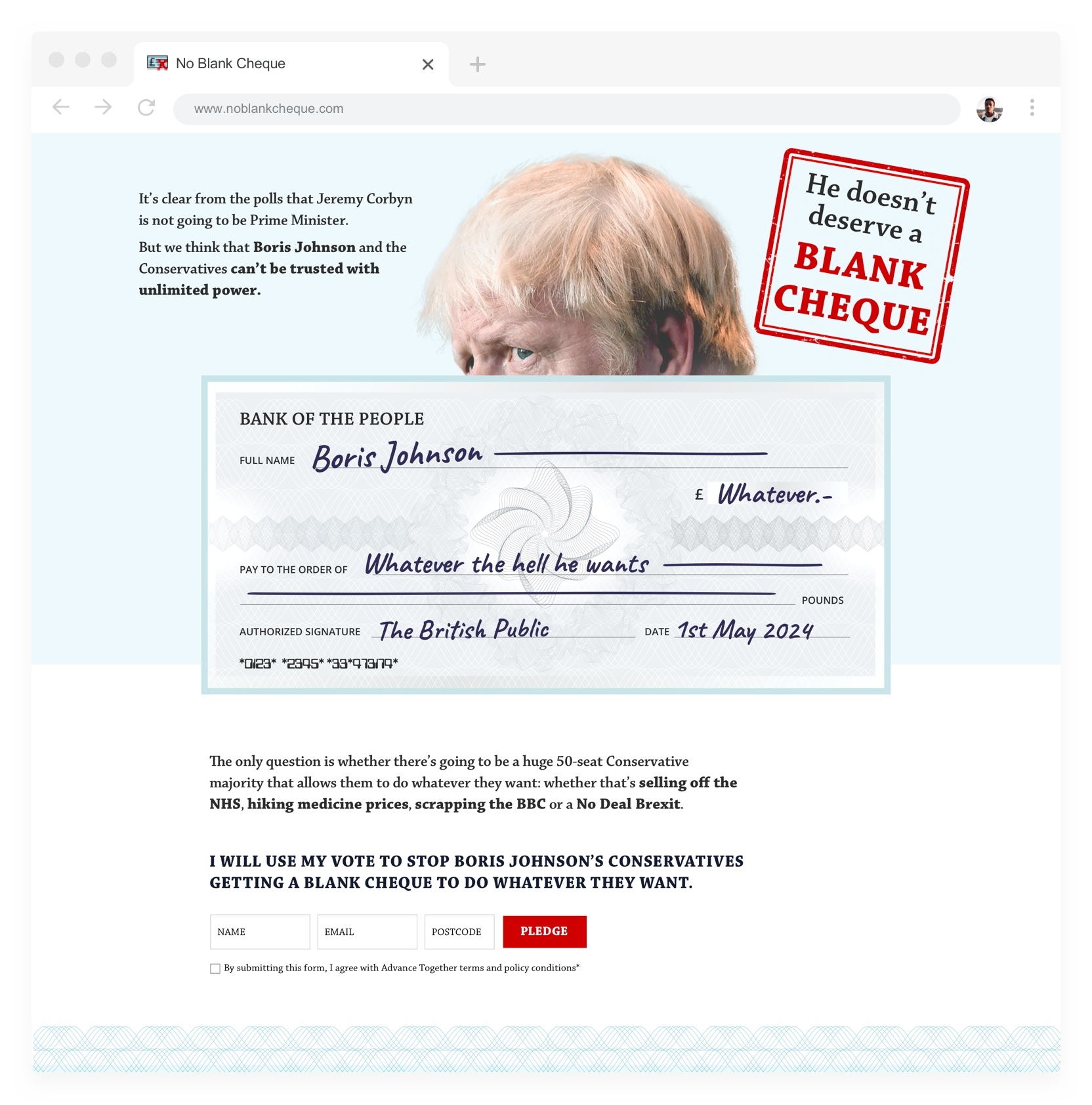 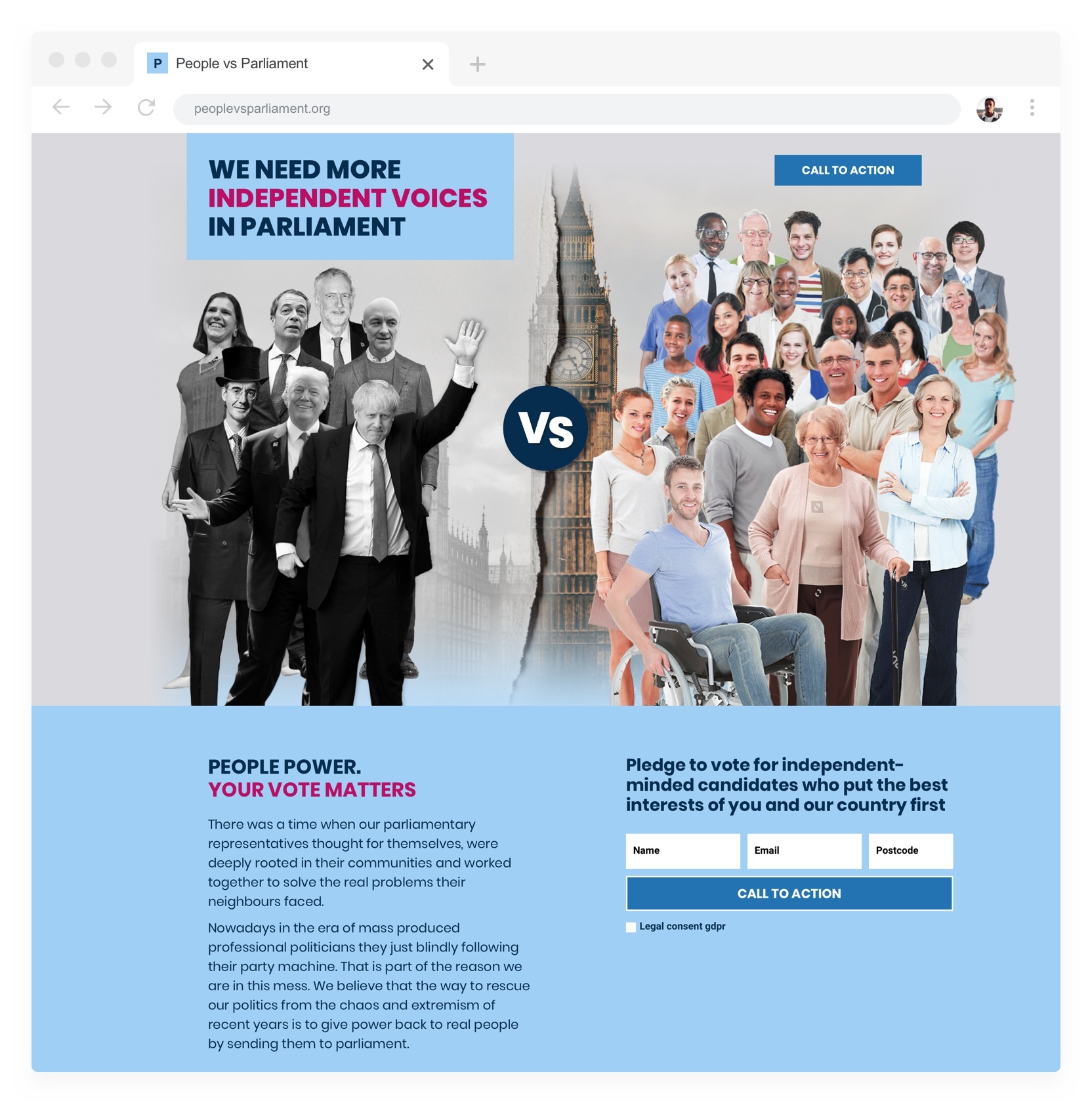 We predicted the outcome - and voter movement - without a costly, time-consuming MRP or poll. Our work far out-performed industry averages. Our only restraint was an ability to scale.
We focused our efforts on trying to effect change in the outcome of the election, unlike many who were focused on trying to predict the outcome without trying to change it. The Liberal Democrats and Labour ran disastrous campaigns and it’s clear would have done even worse without us. 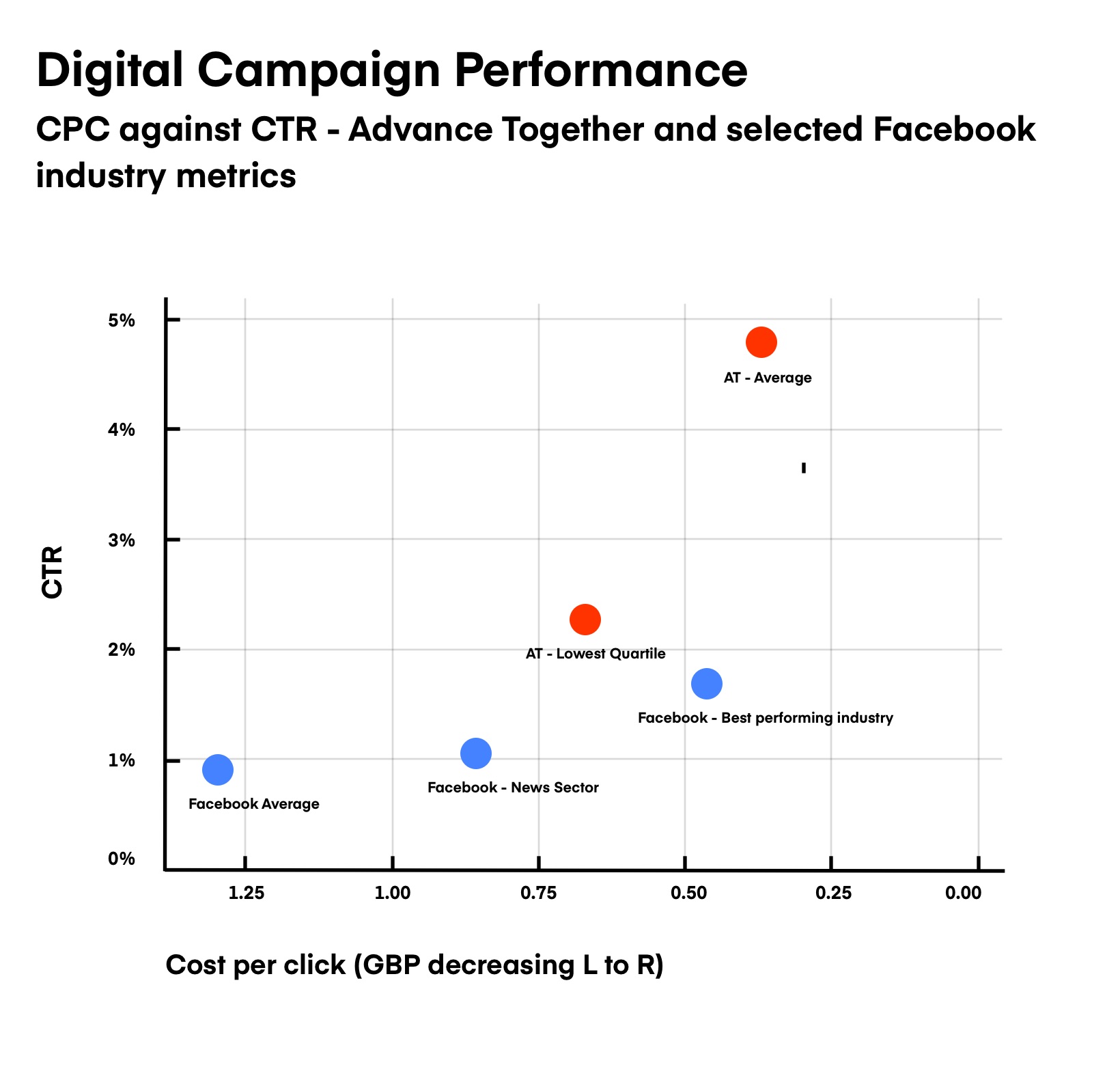